The traditional idea of Ghosts are humans who have died and returned to wander the earth because of “unfinished business” or some other reason… this concept is complete nonsense.

In Luke 24:39 Jesus says, “Behold My hands and My feet, that it is I Myself. Handle Me and see, for a spirit does not have flesh and bones as you see I have.”

When He said this, He was simply confirming that He wasn’t appearing in spirit form but was literally resurrected from the dead with a real physical body to prove it.

Jesus was confirming His physical bodily resurrection from the dead not confirming that ghosts exist.

According to the Bible, when a human being dies they go to Heaven or Hell… that’s it.

They DO NOT return to earth and wander around for any reason.

The Bible says, “We should be cheerful, because we would rather leave these bodies and

This verse confirms that when a Christian dies, he or she goes to heaven.

He said, “the beggar died, and was carried by the angels into Abraham’s bosom: the rich man also died, and was buried; And in hell he lift up his eyes, being in torments…” Luke 16:22-23

This verse is very clear that when the rich unsaved man died he went to hell.

In the Bible, there are 2 specific exceptions concerning people who have died and returned to earth:

In the account of Samuel and Saul, verse 3 says, “Now Samuel was dead… And Saul had put away those that had familiar spirits, and the wizards, out of the land.”

Before we continue, we must answer the question… What is a familiar spirit? 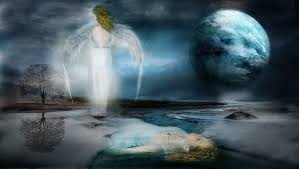 A familiar spirit, similar to a spirit of divination is a demonic entity who specialises in working through so-called Mediums and Psychics to deceive humans in various ways.

One method of deception is to imitate dead people to convince the living that ghosts exist and there is life after death outside of Heaven and Hell.

One of the reasons they are called “familiar spirits” is because their strategy is to become very familiar with the members of a particular family so that after a death occurs they can imitate that dead person and convince the living family members that this is in fact their departed loved one.

Their imitation is obviously convincing because over the years they have purposely become familiar with the dead person’s charateristics, mannerisms and the details of the facts of their life.

Paul in the book of Acts encountered a girl with a spirit of divination and cast it out of her.

Acts 16:16-18 says, “And it came to pass, as we went to prayer, a certain damsel possessed with a spirit of divination met us, which brought her masters much gain by soothsaying.

The same followed Paul and us, and cried, saying, ‘These men are the servants of the most high God, which shew unto us the way of salvation.’

And this did she many days. But Paul, being grieved, turned and said to the spirit, I

command thee in the name of Jesus Christ to come out of her. And he came out the same hour.”

Notice carefully the girl was making factual statements, but because Paul knew the source of that knowledge was a demonic spirit he did not receive it but cast out the spirit and delivered the girl.

This encounter is recorded in scripture to highlight the fact that these types of spirits DO MAKE factual statements but they DO NOT speak the truth… there is a difference.

The purpose of the spirit of divination making those factual statements was to deceive the people and lead them into error and bondage, therefore, one cannot say it was operating in truth.

Truth sets you free… facts can be used to keep you in bondage!

This is exactly what happens during Seances when “ghosts” appear and begin to make factual statements about the dead person’s life.

It is a demonic spirit simply imitating the dead person with the intention of keeping humans in deception, error and bondage.

The Prophet, The Witch and The King

Now, back to Samuel and Saul… we pick up the story in verse 11:

If this woman was accustomed calling up the spirits of dead people and actually believed she was calling up Samuel from the dead, why would she scream when he appeared? She wouldn’t!

The truth is, she had no intention of calling up the Prophet Samuel from the dead but rather she expected her familiar spirit to do the usual imitation to fool the client who she thought was just another fool whose money she was taking.

When the actual Prophet of God appeared she screamed in terror and realised in that moment her client was actually King Saul.

Now, notice very carefully that the Prophet Samuel, though dead did NOT return to wander the earth but rather came on a divne mission from God to deliver one very specific message to one person, King Saul.

After he completed his mission, as far as we know he returned to the presence of God and DID NOT remain on earth among the living.

Conference at the Summit

The next encounter of Elijah, Moses and Jesus in Matthew 17 is even more specific.

To save time I will summarise:

Jesus takes Peter, James and John up a mountain and has a conference with Moses and

It is important to note that while Moses had died, Elijah did NOT but was taken up to heaven alive without experiencing death.

So, in this account only Moses was actually a dead person who returned to earth.

The bottom line is that both Moses and Elijah appeared to Jesus, obviously to deliver an important message to Him, then departed after completing their mission.

Similar to Samuel, they did not remain wandering the earth for any reason after completing their mission.

All three of them, Samuel, Moses and Elijah were Prophets of God whose job is to bring specific messages from God to Man and their purpose did not change because they changed address.

Whether they live in Heaven or on Earth God still retained the right to use them exactly as He saw fit and He chose to use them to deliver specific messages for Him even after they transitioned from Earth to Heaven.

We think in human terms, that after someone is dead that’s it… they’re gone, they’re done!

God is Eternal and Omnipresent… He is NOT limited to Time and Space like we are.

To Him, none of these Prophets are dead as we think of death… they simply live in a different realm and if He wants to, He can send them to earth to deliver a message if He sees fit to do so… and He did, He is God!

Bottom line, these are exceptions to the rule that once dead, a human being either goes to Heaven or Hell and remains there until Judgment Day… Ghosts do not exist.