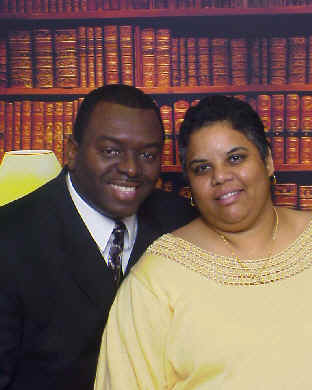 My name is Everest John Alexander;  Bible Teacher and Author.

I am married to my best friend of 40 years, my darling Loraine who literally prayed me into the Kingdom of Heaven!

We have two beautiful children, Ishmael Andrew Alexander, 33, a mighty man of God with a powerful Prophetic anointing on his life and the multi-talented Elisha Jade Alexander, 30, a Holy Ghost filled Counselor with an anointing for divine wisdom!

We also have a blessing of a grandson named, Noah.

He is brilliant and beautiful and has been ceremoniously dubbed, Mr. Pumpkin!

We currently live in Fort Pierce, Florida but originally hail from the beautiful twin-island State of Trinidad & Tobago in the Caribbean. (Tobago is pronounced “Tuh-BAY-go)

For the eight years between the ages of 17 to 25 I had been searching for something, I didn’t know exactly what but I knew that when I found it I would recognize it.

I studied Esoteric Astrology for some years, read Linda Goodman, Jean Dixon and Edgar Cayce among others.

I consumed books by Tuesday Lobsang Rampa, a renown Tibetan Priest who authored about 20 books on the occult the most famous being “The Third Eye”.

I browsed the writings of Paul Twichell, a former living Eck-Master. And studied a book or two of ‘The Rosicrucian Order.’ I even owned a copy of ‘The Bhagavad Gita’ (pronounced Bag-Wah Ghee-Tah), which I read cover to cover.

For those who don’t know, The Bhagavad Gita is a Hindu holy book second only to ‘The Vedas.’

I was a seeker of Truth… or so I thought of myself!

It was through a series of really bizarre encounters with serious demonic forces that I came to know Jesus Christ as my personal Lord, Savior and Deliverer.

Thank God He had lots of people praying for me!

I was born again on Thursday August 11th 1988 and started preaching and teaching the Word of God about three years later after being home-schooled in ministry by the Holy Spirit.

After being so involved with the Occult and being deceived by the devil I wanted to know all I could about the truth of the word of God so I read the Bible cover to cover the very first year I was saved.

I simply opened at Genesis, began reading and didn’t stop until I reached Revelations. I read from “In the beginning…” to “Amen” in one year.

I entered full-time ministry in 1997 and read the Bible cover to cover again. My wife and I Pastored a small church for about 4 years before we migrated to the United States in 2001.

I served as an Elder and Minister at my home church, Faith Center International in Port St Lucie, Florida until 2009 when I resigned my position after realizing that I simply was not getting the spiritual nourishment that my family and I needed.

A short while after leaving Faith Center we were introduced to the powerful teaching of Pastor Joseph Prince of New Creation Church in Singapore and the Holy Spirit opened my eyes to the fullness of the Covenant of Grace that Jesus died to give us.

Since then I’ve been having fellowship with my immediate family at home while feeding on the word of God from the teaching of Pastor Joseph Prince and others like, Dr. Chuck Missler, Dr. Mike Murdock and Dr. Myles Munroe.

It’s an outlet for my Teaching Ministry and  also a Christian Community where all are welcomed to share their experiences and to ask and receive answers to Bible-related questions.

I’ve uploaded several Videos, Articles and Bible Study Courses that share the principles of the Kingdom of God.

I remain passionate about communicating the Gospel of Jesus Christ to the lost and teaching the Word of God the Church.

It was a way to release pent-up emotions and to express the difficulties of growing up with an abusive father and without a mother (My Mom migrated to the USA when I was eight) those two aspects coupled with the Ghetto lifestyle that was my experience growing up in Febeau Village, San Juan, Trinidad & Tobago in and around Laventille Road or “Lanty Road” for those of us who lived there.

Writing Poetry, Songs and Rap I suppose was very cathartic in those days – Though I didn’t even know such a word existed back then.

The nature and character of my writing has obviously evolved since I met and fell in love with Jesus back in the Summer of 88′.

To date, I’ve written and self-published 3 books in electronic format the first of which is called, “Understanding the 3 Levels of Salvation: Spirit, Soul & Body” and has been sold on 5 continents, in 16 countries, including; South Africa, Ghana, Nigeria, Kenya, Australia, Singapore, Qatar, The Philippines, the USA, the UK, New Zealand, Canada and Barbados.

I still write the occasional Poem and have plans to write my first Novel soon.

I LOVE watching Movies and tend to  favor the Si-Fi /Fantasy Genre but in writing my own Novel I may have to invent a whole new Genre.

I started rapping in 1979 after I heard Rapper’s Delight by the Sugarhill Gang on the radio.

I was accustomed to writing Poetry so it wasn’t a big stretch branching into Rap.

It took more time to actually grow as a Rapper and learn how to flow vocally and project my voice in order to command the attention of my audience.

One experience that really made a difference was an encounter I had at a party one night with a guy I grew up with.

His name was Franklin and I hadn’t seen him for several years when we met at the party that night.

He was making a name for himself as a DJ and was actually rocking the house that night on the turntables when he invited me to say something on the mike.

I was elated by the invitation and started to spit one of my rhymes with my little squeaky underdeveloped rap voice.

I had barely began to speak when Franklin whipped the mike away and began to rap in the most brilliantly distinct and commanding voice I had ever heard rap live on a mike.

He opened with, “I’M THE INITIATOR, THE ROCKIATOR… I AM THE BOSS!!!”

In comparison to him I sounded like a chicken with a broken wing squawking in the backyard.

I have never forgotten that experience!

After I slinked away from the mike with my wounded pride I made the decision to become BETTER not bitter and practiced projecting my voice, speaking from my belly instead of my throat, giving my voice a full rich roundness and volume it never had before.

With my new Rap voice and the DJ skills I learned from my favorite cousin, Wayne John I started making Mixed Tapes with me rapping on some of the instrumental tracks and selling them.

The highlight of my “Rap Career” came one night at another party several years later when my Partner-in-Rhyme, Dexter A.K.A. Flex and I were invited to spit on the instrumental version of popular Reggae song called, “Money Worries.”

We took turns rapping reggae style and absolutely brought the house down, some people were totally shocked to see two guys rapping live in the DJ booth… Until then, they thought they were listening to an actual record, so professional was our unique sound.

After I got saved in 1988 I started rapping for the Lord after a year hiatus during which I told Him to take my rap skills and all the songs I had written and do whatever He wanted with them.

When the year was up He inspired me to write my first Gospel Rap called “Satan is a Liar” and He followed that up by composing a Rap Song of His own entitled, “The Gospill: Jesus Christ the Righteous.”

The Holy Spirit dictated that song to me prophetically as all I did was write the lyrics word for word as He poured them into my spirit.

He told me He wrote that Rap Himself to confirm that gospel rapping for me, was ordained by Him and I’ve been writing and rapping to the glory of God ever since.

I have written about 25 songs and ministered many of them in church but right now I’m patiently waiting on the Lord to hook me up with the divine connection to the right person who will create the right beats for my unique sound. Praise God!

I remember picking mangoes off the mango tree back home in Trinidad & Tobago, setting up a table at the roadside and selling them for a profit at the age of seven.

I just like the idea of interacting with people in an atmosphere of Commerce and Trade. I guess it’s in my blood.

My wife and I started a retail Ice-cream business from our kitchen in 1993 with one Ice-cream cart, selling to school kids during their lunch break at the high-school in our neighborhood.

In one year we were employing 5 people, had three Ice-cream Carts and wholesaling to The Trinidad Hilton where I had my day job.

Unfortunately, due to external circumstances we were forced to close that business at the end of the first year just after massive expansion of the enterprise.

In July 1994 I was first introduced to Network Marketing by Tony, a good Friend and Brother in Christ. It was the most exciting thing I had ever seen in the business arena – The company was Amway!

To make a long story short I did that for several years during which I went to MLM College as it were and gained a very valuable education in Network Marketing and a profound love of the industry but never achieved the level of financial success I wanted.

I subsequently joined several more MLM companies over a 25 year period from Sky Biz to Melaleuca, the latter of which I earned over $30,000 part-time over several years and of which I’m still a customer and earn a small monthly residual income up to today.

From the very first time I went online in 1999 I became fascinated with websites and I began teaching myself how to build and design them.

My first few efforts were these horrible little eyesores that I’m sure terrorized people on the internet until I gained some skill and started creating more acceptable websites.

Since my early days on the internet I’ve picked up some Internet Marketing skills along the way and been growing in experience and honing my skills over time.

Today I employ my internet marketing skills to promote my online ministry and teach the word of God to as many people as possible.