That’s all I could think as huge hands tightened around my neck and an invisible weight pressed me into the bed, squeezing the very life out of me.

I could NOT move!

The attack began in my sleep but continued even while I emerged into full consciousness. I could feel the huge hands around my neck but I couldn’t touch them. I grabbed for them and touched… Nothing… Thin air!

Yet they closed even tighter.

My eyes popped opened and stared directly into his.

That’s the best way to describe them!

Red, glowing blood-slits in a faceless form – a vague outline of a man. No features, just a blackness that was darker than the darkness around.

It was a supernatural darkness with personality, a malevolent force that manifested itself as a being totally without light.

I was wrestling with a Demon and terror stampeded through my mortal soul!

No… this is not an excerpt from a novel.

I actually experienced this over 30 years ago on a Wednesday morning about 2:00 AM. I will never forget that experience!

I had gone to bed just before 1:30 AM after consuming some KFC chicken and fries.

I was working as a Security Guard with ‘BRINKS TRINIDAD LTD.’ and had just finished the 4PM – 12 Midnight shift at a KFC outlet, although back then they hadn’t shrunk the name as yet.

For years I had been searching for something, I didn’t know exactly what! But I knew that when I found it I would recognize it. I studied Esoteric Astrology for some years, read Linda Goodman, Jean Dixon and Edgar Cayce among others.

I consumed every book by Tuesday Lobsang Rampa, a renown Tibetan Priest who authored about 20 books on the occult the most famous being “The Third Eye”. I browsed the writings of Paul Twichell, a former living Eck-Master. And studied a book or two of ‘The Rosicrucian Order.’

I even owned a copy of ‘The Bhagavad Gita’ (pronounced Bag-Wah Ghee-Tah), which I read cover to cover. For those who don’t know, The Bhagavad Gita is a Hindu holy book second only to ‘The Vedas.’

I was a seeker after Truth… or so I thought of myself!

At the time of this attack I was a devout member of a Pseudo-Christian religion and attended church every Sunday, Bible in hand. I thought I was so holy that I would start sprouting wings and a halo any minute.

But as I fought with this demon none of my knowledge of the Occult or any religious teachings came to my rescue.

As I lay on that bed with my head full of information from hundreds of so-called spiritual books I was as helpless against this Demonic Terminator as a mosquito in a hurricane!

I was literally losing my life and could do NOTHING about it!

But after struggling for a while something did begin to take shape in my mind. It was something my spiritual leader at that time had shared with me. “The only true power,” He said, “is in the NAME OF JESUS!” “We have many religious practices but if you’re ever in trouble call on HIS NAME!”

So as I battled this Satanic Assassin I somehow remembered this advice… and I called!

In my mind I was screaming JEEEZZZUSS!!!!! But in actuality because my air supply was cut off the sound barely escaped my lips as a whisper… Jesus.

But that was enough!

At the sound of the MOST POWERFUL NAME in the universe I felt the hands release me and I saw the demonic spirit retreating and fading into the background. I was loosed!!!

I WAS FINALLY FREE!!!

I would like to say that I was immediately and stunningly converted to the Lord Jesus Christ but I was NOT, it actually took two more years of very interesting experiences before I completely converted to true Bible Christianity and experienced being Born Again!

Thank God I eventually was converted from occultism and religion to the living CHRIST!

I served God in a small Holy Ghost filled, on fire church for seven years before The Lord called me to my own ministry.

I went through a mighty deliverance process, which took years of reconditioning my mind to flow in the liberty of the Holy Spirit and accuracy of the Word of God!

The Holy Spirit led me on an educational adventure, I read the bible cover to cover the very first year I was saved and again the first year I entered into full-time ministry (1997).

In 2015 I decided to try and read through the Bible cover to cover, every year, and actually did so in 2016 (although it was mostly listening to it on audio) but this year 2017 I struggled a bit and got through about half.

I will resume with renewed resolve in 2018.

I never attended Bible School but rather home-schooled in ministry by the Holy Ghost.

In my lifetime I’ve read over a thousand books on a wide variety of topics (Both Fiction and Non-Fiction), some specific books that have impacted my life are:

From the beginning of my Christian life, God led me to his teachings and along with intensive Bible study and copious amounts of fasting they have helped form the foundation of my understanding of the Word of God!

I do not agree with everything he has taught, but he has been instrumental in developing my spiritual understanding.

SPECIAL NOTE: In 2010 the Lord introduced me to the teaching of Pastor Joseph Prince and for the first time in a very long time everything began to make perfect sense once again.

Over the years my Christianity began to wane and I became more and more confused and depressed by different experiences I had along the way.

But after listening to Pastor Prince explain the Covenant of Grace everything began to clear up and life began to make perfect sense once again. Thank God!

Most recently I’ve been feeding off the teaching of Dr Chuck Missler, whom I consider one of the most brilliant Bible Teachers ever. 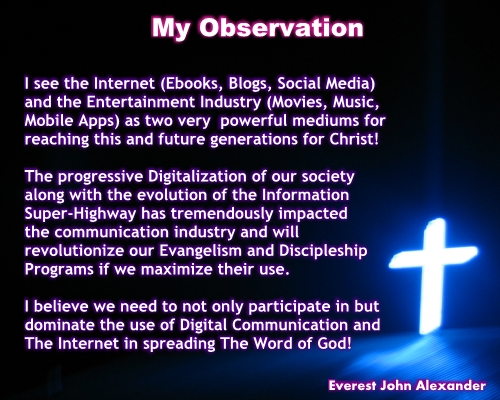 8 comments on “My Testimony”