What Does “Support Israel” Mean For Present-Day Christians?

The Covenant was Made to Abraham AND HIS DESCENDANTS

God said, “No longer will you be called Abram; your name will be Abraham, for I have made you a father of many nations.

I will make you very fruitful; I will make nations of you, and kings will come from you.

I will establish my covenant as an EVERLASTING COVENANT between me and you and YOUR DESCENDANTS AFTER YOU for the generations to come, to be your God and the God of your descendants after you.

The whole land of Canaan, where you now reside as a foreigner, I will give as an EVERLASTING POSSESSION to you and your descendants after you; and I will be their God.” Genesis 17:5-8 (NIV)

David said, “He remembers his covenant forever, the promise he made, for a thousand generations, the covenant he made

with Abraham, the oath he swore to Isaac. He confirmed it to Jacob as a decree, to Israel as an everlasting covenant: “To you I will give the land of Canaan as the portion you will inherit.” Psalms 105:8-11 (NIV)

For those who are hard of hearing or understanding, God explains the permanence of this Covenant in detail:

God says, “I am the Lord All-Powerful. I command the sun to give light each day, the moon and stars to shine at night, and ocean waves to roar.

I will never forget to give those commands, and I will never let Israel stop being a nation.

I, the Lord, have spoken. Can you measure the heavens? Can you explore the depths of the earth?

That’s how hard it would be for me to reject Israel forever, even though they have sinned. I, the Lord, have spoken.” Jeremiah 31:35-37 (CEV)

My Observation: Christians who still align themselves against Israel in this war for their God-given land are willingly ignorant and blind.

Here’s Wisdom: Supporting Israel does NOT mean agreeing with everything they say or do as a nation.

Supporting Israel does NOT mean we as Christians are naive and expect all Jews to see us as their friends or saviors… That’s simply NOT going to happen.

Supporting Israel does NOT mean we believe Israel as a nation is living a life pleasing to God. On the contrary, we know for a fact that many Jews are Atheists, Agnostics and Anti-Christian.

That’s NOT the point!

The point is that we have a mandate from God to support the Jewish people.

Though they have sinned exceedingly, God’s favor has not totally departed from them and eventually they will be saved and inherit everything God promised them under the Abrahamic Covenant, which is an unconditional covenant of Grace.

The wise Christian adopts an eternal perspective and is not swayed by the political machinations of the power hungry and those with demonic ulterior motives and agendas.

What Does “Support Israel” Mean For Christians? 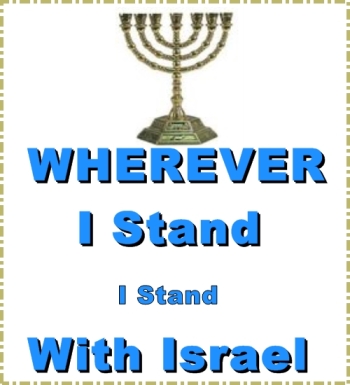 For Bible-Believing Christians living in the 21st century here’s what showing support for Israel should look like:

2) Evangelize them whenever and wherever you can – Share the Good news that their Messiah has already come and is waiting with open arms of love and forgiveness for each of them to return home to Him.

3) Live exemplary lives so they can actually see what a covenant relationship with Christ looks like.

4) Do not be deceived by the devil’s propaganda machine and be caught doing Satan’s work for him against God’s chosen people.