Re-Thinking the Nature of Truth: How Does One Attain True Knowledge? 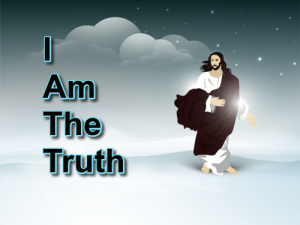 Pilate was talking directly to Jesus when he asked Him this question.

Which means the Truth was literally staring him in the face… but he couldn’t see it!

This leads us to understand that unless your heart is open to receiving the Truth, you’ll always be blind to it.

You can ask the right questions and engage in intellectual pursuit but The Truth is ultimately a Person.. Jesus Christ.

Therefore, getting to know the truth means forming a relationship with someone.

It is only to the degree that you’re willing to allow a relationship with Jesus Christ that you are able to perceive the truth.

Unless you are willing to know Jesus, the truth could repeatedly slap you in the face and you still won’t see it. 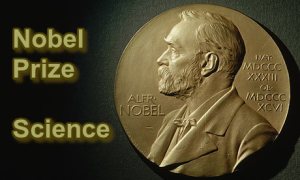 “The fear of the LORD is the beginning of knowledge, but fools despise wisdom and instruction.” (Proverbs 1:7)

“The fear of the LORD is the beginning of wisdom, and knowledge of the Holy One is understanding.” (Proverbs 9:10)

“The fear of the LORD is the beginning of wisdom; all who follow his precepts have good understanding.” (Psalms 111:10)

And before you leave with the wrong concept, the phrase, “Fear of the Lord” does NOT mean to be afraid of Him, it simply means to reverently worship God… which is what wise people do! 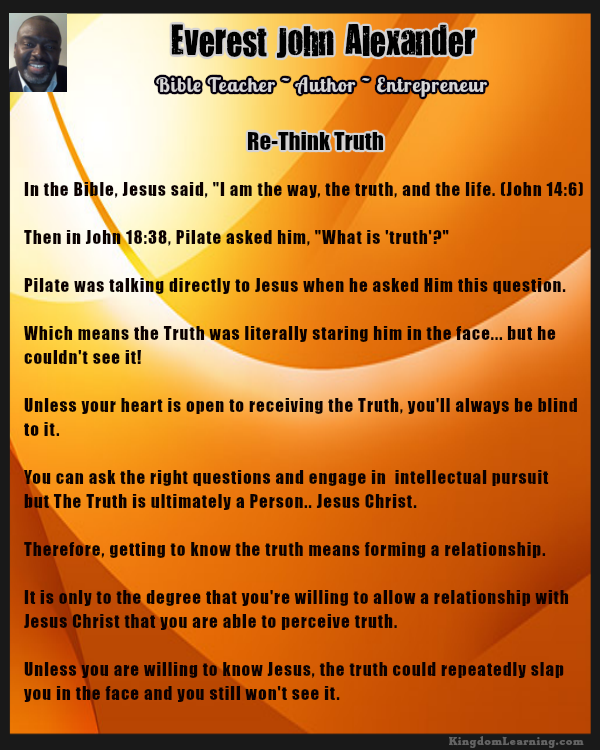 For the rest of the world there is much to debate.

Apart from the question of Morality there are also Political, Legal, Social and Health issues to consider when discussing the rights and wrongs of Homosexuality.

But for the Bible-Believing Christian, there is no such conflict.

This matter is forever settled in Genesis Chapter One of your Bible.

God created the Human Race with a very clear purpose in mind, “Be Fruitful, Multiply and Have Dominion!” Gen. 1:28

This is God’s Prime Directive to the Human Race… The very reason we were created in the first place!

Two members of the same sex CANNOT fulfill this mandate… They cannot be fruitful and multiply.

The Ideology and Practice of Homosexuality is contrary to God’s original intent for Humanity and therefore wrong.

As a Born Again Christian this must be your ideological starting point, then you go from there and consider other aspects of the issue under discussion.

As Christians, we must see things from the Bible’s perspective first, then consider every other aspect in light of what God has already said about the matter. 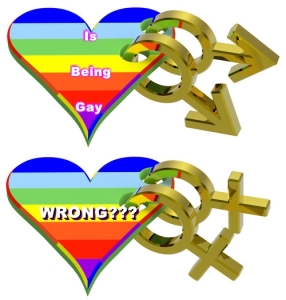 This is what protects us from ideological error and bad judgement.

So, is Homosexuality a sin… Most definitely it is!

It transgresses the most vital principle God laid down for the Human Race… Which is to reproduce other beings in His image.

In the beginning God made them Male and Female and instituted the Marriage of one man to one woman with the resulting family as the foundation and building block of Human Civilization.

To violate this intrinsic principle is to strike at the very heart of God’s Dominion of us.

This is why Homosexuality is not just another sinful practice… at it’s heart, it is the most fundamental rejection of God. 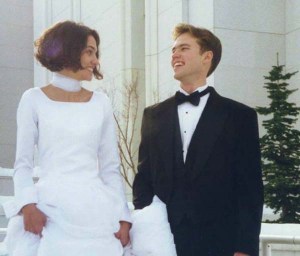 It is rejecting His image in us. If we are Homosexual or merely agreeing with it we are assenting to the rejection of God.

If the Human Society embraces the Homosexual ideology we will have universally rejected God.

This will create an open invitation for our children to be inhabited by every description of demonic spirit imaginable.

No wonder the entire society of Sodom and Gomorrah was destroyed.

This was actually an act of God’s mercy in not allowing the devil to perpetuate the cycle of possession and destruction into the next generation.

Sin is progressive, with each successive generation it gets worst and would have eventually spread throughout the entire region!

Before you know it, another worldwide catastrophe would have been needed to eradicate the pandemic of demonic possession.

Bottom line, there is no greater rejection of God than to reject His image in you.

And this is what being Gay is… A fundamental rejection of God’s image in you and consequently His dominion over your life.

The Bible says, “Women no longer wanted to have sex in a natural way, and they did things with each other that were not natural. Men behaved in the same way. They stopped wanting to have sex with women and had strong desires for sex with other men.

Since these people refused even to think about God, he let their useless minds rule over them. That’s why they do all sorts of indecent things.” Rom 1:27-28

Have you heard this one before?

You ask a young person, “Why are you an Atheist?” And they smugly respond, “I’m an Atheist because I learned to think for myself.” 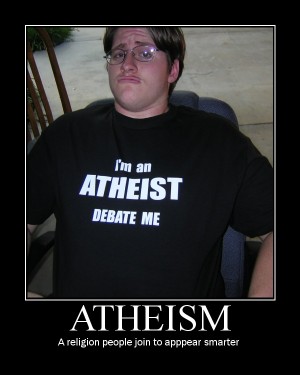 Well, I’ve been there and heard that several times.

And the next time I have the experience, here’s what I’d like to tell that young person…

You’re not an Atheist because you “Learnt to think for yourself.”

You’re an Atheist because you were educated by a corrupt school system that has largely rejected God by legislating the Bible and Prayer out of classrooms.

You’re not a “Free Thinker” as you’ve been deluded into believing.

You’re the puppet of Godless hierarchy, boasting instructors who taught you WHAT to think instead of HOW to think.

You are the victim of a devilish system that has given you the illusion of free thought, encouraged you to worship SELF and manipulated you into preaching a gospel of destruction.

Just as a fish out of water can never be free… So a man apart from God will always be a slave! 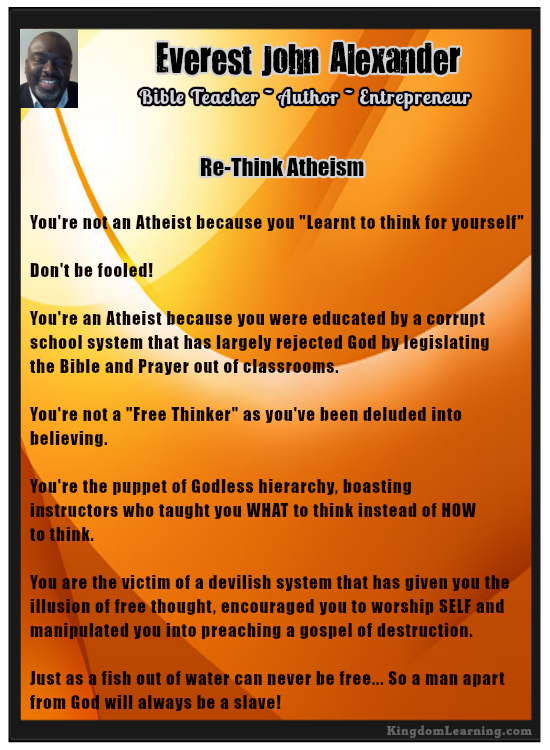 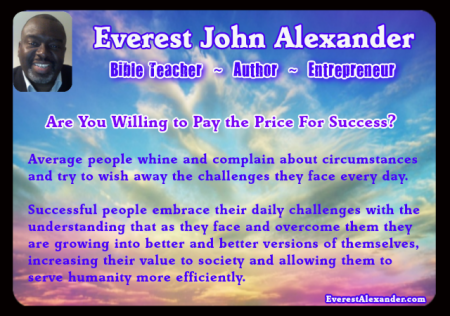 Average people whine and complain about their circumstances and try to wish away their daily challenges.

Successful people embrace the difficulties of life with the understanding that as they face and overcome each challenge they are being forced to grow into a better and better version of themselves and in so doing they are able to more efficiently serve humanity with their gifts.

You increase your value to society by becoming a better and better problem solver and your income grows consistently with the quality or quantity of problems you choose to solve.

The tragedy of this reality is that 21st century society has placed a higher value on Entertainment than on Education that’s why Athletes and Actors are millionaires and Teachers are broke!

So how should the wise person relate to this information?

Start by figuring out where society places their highest value and which problems pay you the most money to solve. 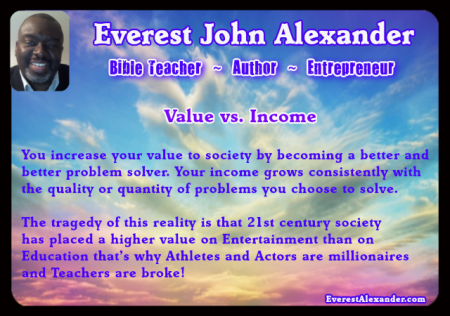 For instance, solving medical and legal problems are of very high value so generally speaking Doctors and Lawyers make a lot of money.

The problem is, there is an extremely high price to pay to become a Doctor or Lawyer, so where does that leave the average person with beyond average dreams?

Remember, income grows consistently with the quality or quantity of problems you choose to solve… Quality OR Quantity!

Lawyers and Doctors earn a lot because of the QUALITY of problems they solve.

If becoming a Doctor or Lawyer is too expensive a price to pay, then you need to find a problem in large enough QUANTITY so that a lot of people will pay you to solve it.

Ask yourself this question… What problem exists in a very large quantity that I can learn to solve without having to pay too high a price to get started?

Think about it… everyone needs or wants more money. Even those who are already financially well off by society’s standards still desire more money.

Would THAT pay YOU a lot?

Finding What Can Pay YOU

Dexter and Birdie Yager are the highest paid Network Marketers in the world, earning $1.3 million dollars every month!

That’s great news but here’s the interesting thing, they earn this because they have built the most successful Network Marketing organization in the history of the world.

Their team spans more than 40 countries with over 1 million Distributor/Partners.

In other words, they are currently helping over one million people achieve financial freedom… THAT’S WHY THEY ARE PAID SO WELL!!!

They have found a problem that everyone needs solving and have become experts at solving it.

That’s the Essence of Network Marketing… helping as many people as you can, solve their financial problem.

This is something YOU can learn to do.

The Network Marketing Industry is an open playing field for anyone to succeed.

The choice is yours! 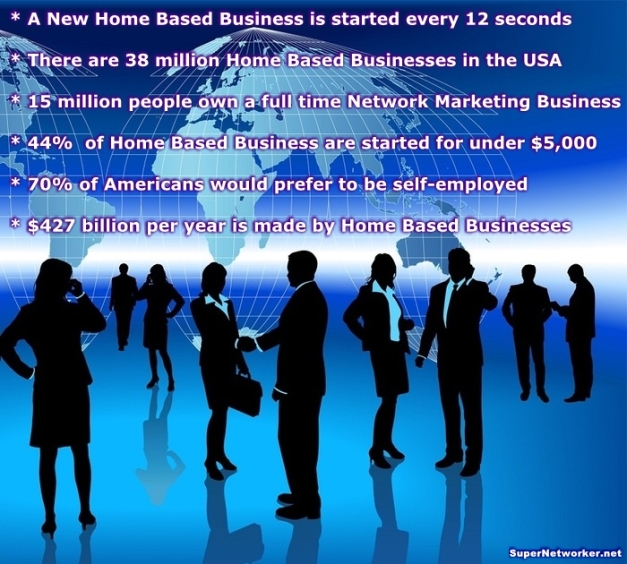